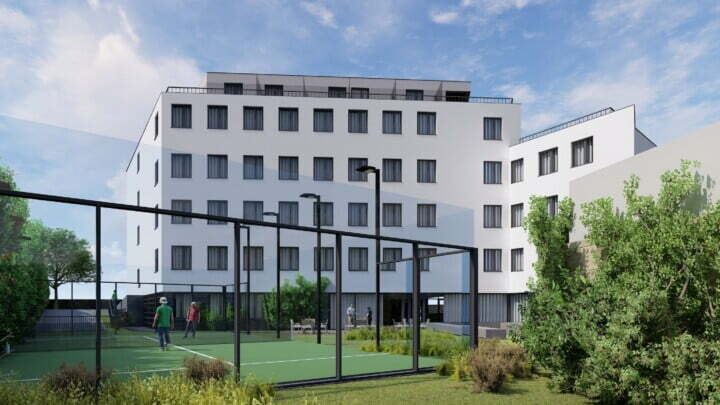 Amro Partners has expanded its reach across Iberia with strategic student accommodation projects in the Spanish capital Madrid and Portugal’s second largest city Porto, together delivering an additional 367 dedicated student beds to the region and consolidating Amro’s position as a pan-Iberian PBSA developer and operator.

Following projects in Granada, Malaga, Seville, Valencia and Pamplona, Amro’s new project in the capital of Madrid strengthens our presence in the Spanish student housing market after three years of solid growth. The property, situated on a 5,600 sq m buildable plot in Getafe, a key residential municipality in the south of Madrid, will provide 216 student beds alongside shared facilities including a canteen with outdoor space, study rooms, co-working spaces gyms and an outdoor pool. The Universidad Carlos III de Madrid (UC3M), the second highest ranking Spanish public university with a local population of more than 18,000 students, is within a five-minute walk, with the Universidad Rey Juan Carlos (Leganés Campus) and Hospital Universitario de Getafe both nearby.

Entering Portugal for the first time, Amro will develop a project in the Paranhos area of Porto. Located within the city’s main university hub, Polo II University Campus (Asprela), which is home to more than 35,000 students, the 151-bed scheme will comprise a mixture of individual studios, twodios and doubles with amenities including study rooms, terraces, gym, MasterChef room, padel court and outdoor green areas. Five higher education institutions are situated within a 5 to 15 minutes’ walk: University of Porto, University Fernando Pessoa, Polytechnic Institute of Porto, Catholic University of Porto and Portucalense University.

Both properties will open in summer 2023 and will be operated under the Amro Estudiantes brand. In line with Amro’s Net Zero Carbon 2030 pledge, the properties will be designed to target a BREEAM “Outstanding” rating, creating two of the most sustainable new buildings in Iberia.

Amro will target further student housing projects in Spain and Portugal over the next 12 months to capitalise on the early-stage student housing market, where the ratio of students to dedicated student beds currently stands at approximately 10:1.

Raj Kotecha, Co-Founder and Managing Director of Amro Partners, said: “We have achieved an extraordinary period of growth that has seen us realise our ambition to become a truly pan-Iberian business in just three years. The student housing market in Iberia remains critically underserved and, crucially, has proved itself to be resilient over the last fifteen months. Our projects in Madrid and Porto ensure we continue to successfully capture meaningful early market share and we remain focused on growing our presence in the region with further student and multifamily housing opportunities in the pipeline.”

Since its launch in Iberia in 2018, Amro Partners has undertaken seven student housing projects across the region with a total GDV of circa €200m, two of which have been sold to Xior, the Belgian REIT, for a combined sum of €60M. Well-established in the UK Build to Rent sector, Amro is now seeking to expand its Iberian presence further with a debut in the region’s burgeoning multifamily housing market expected in the second half of 2021.

Read all about this story in an exclusive with EGi.

Accolades for The Green Rooms in HomeViews awards